I’ve been for weeks trying to sit down and drop here, in words, everything that moves me – all the feelings and emotions that grow on me every single time I listen to this album. And don’t get me wrong, I’ve been listening to “Cosmology” by Spanish prog-masters Kotebel, almost every single day, since first I heard it around a month ago! This has to be one of the most complex and dense albums I’ve had the pleasure to listen to in the latest years. Beautiful and diverse, no real virtuoso’s work, but so complex in its composition and nature, as is the subject in which the music is based.

The first part of “Cosmology”  consist of 5 songs about the cosmos, in different philosophical perceptions, ranging from the pure scientific point of view, passing through the religious crystal, to a more spiritual and metaphysical concept about the Universe.

The opener “Post Ignem” is a blast of everything in your ears. Like the Big Bang, as I can imagine Carlos Plaza and bandmates might have had in mind when creating such an energetic opener. The name suggests, what was after the Big Bang, when the Universe suddenly was there. It starts with a spacey keyboard intro, melodies in synth and a piano serving as a preparation for what’s to come. Latin American rhythms fuse with electric guitars, synths and mellotrons. These spacey sounds gain the landscape and create the mood for a lower-paced piano. This part reminds me a lot of something Steven Wilson would have made for the Raven album, but quickly comes back to the Kotebel sound.  Percussion elements that don’t act as fillers but rather as an important part of the story telling: something is brewing and will soon explode. The explosion doesn’t really happen, but instead we have a change of pace where the electric guitars from Cesar García Forero recover the lead role and take us through the rest of the song, while the synths and mellotrons (and moogs?) from Carlos and Adriana Plaza Engelke keep building up the background. Throughout the song we have the omnipresent flutes from Omar Acosta, if just listed as ‘very special guest’, he should be official part of the band as he has collaborated with them before and his flute is intrinsically part of Kotebel’s sound.

‘Geocentric Universe’ as the band describes it “Earth as center of the universe and God as an anthropomorphic entity”, is based on the Ptolemaic system, which practically everybody believed until the 17th century, and a religious point of view. The song takes us on a softer voyage where the flute takes the lead, guiding us through different states of mind or beliefs? Starting very soft paced where analog instruments take the lead: flute, Spanish guitar and piano are the main voices here. Are we witnessing some form of religious bliss? Soon join the drums and electric guitars, still on a second plane, behind, only supporting, but slowly the piano creates momentum in a fusion of jazz, latin-american drums and electric guitars. Rapidly the flute upfront takes to a more volatile journey. Piano keeps it all together and we spiral down towards the center (Earth?) not before making a stop where piano joins the electric clean guitars and synths on the background alongside drum’s ghost notes, taking us to a new level of understanding. It all gives way to a faster paced, yet again, latin-american vibe with all instruments in a frenzy crescendo that suddenly stops with the Spanish guitars leaving us in an open question… Did we transcend the concept of earth and religion in the center of it all?

Now we reached ‘Mechanical Universe’, clearly stated as the track opens with mechanical industrial sounds and a persistent mechanical background sonic texture brought by pretty much each instrument. The song’s concept is that “the cosmos is a complex machine where parts interact with each other based on physical laws. God does not exist”. The whole vibe of the song quickly assets the ‘mechanical’ part of it all. Darker in nature and more direct but not without emotions, all the melodies have that mechanical feel to it. A lot of repetitive melodies that collide in a mashup of progrock synths, Spanish guitars, piano, mechanical tools sounds, afro-venezuelan rhythm patterns, and electric guitars. What a mix! Generally the song brings me memories of old Porcupine Tree, but beyond it, it has its unique sound. The song comes to a sudden end after a crescendo where all instruments collide. The machine suddenly stopped?

The Latin-American vibes come again and again as the Caribbean roots are well-established within the band, after all the founder and brain behind Kotebel, Carlos Plaza, his daughter Adriana Plaza (though born in Spain), Carlos Franco Vivas and Omar Acosta are Venezuelans.

In an even darker turn, but with some splashes of bright light, comes ‘Entangled Universe’, its concept being “Rather than isolated entities, we are actually all ‘connected’”. Flute and keys in a perfect synchronization open the track, giving way to Spanish guitar to then start full force with an again quite porcupine-tree’sque melody, but just for seconds as it tangles again and within the mix of influences and styles Kotebel’s music dwells from, it goes from Jazzy elements to world-fusion, to art-rock, to straight progrock in less than a minute! The Flute again carries the main line of melody along the electric guitars. On the other hand, and despite being usually ‘background’ elements, the rhythm section –bass, drums and percussion– on this track clearly gain the lead if just solely because of the mastery in which they’re performed. If there was any doubt, here it becomes crystal clear that Carlos Franco Vivas is a master on percussion and afro-caribbean sounds mixed with progressive rock elements. I just wished his performing was highlighted more on future releases. The bass from Jaime Pascual  threads along the lines of the rhythm established by Franco Vivas or by the keyboard patterns from any of the Plaza’s. The song continues from the hand of flute and electric guitars, somewhat following the same structure of the previous ones: reaching a climax to end in a sort of sudden closure. 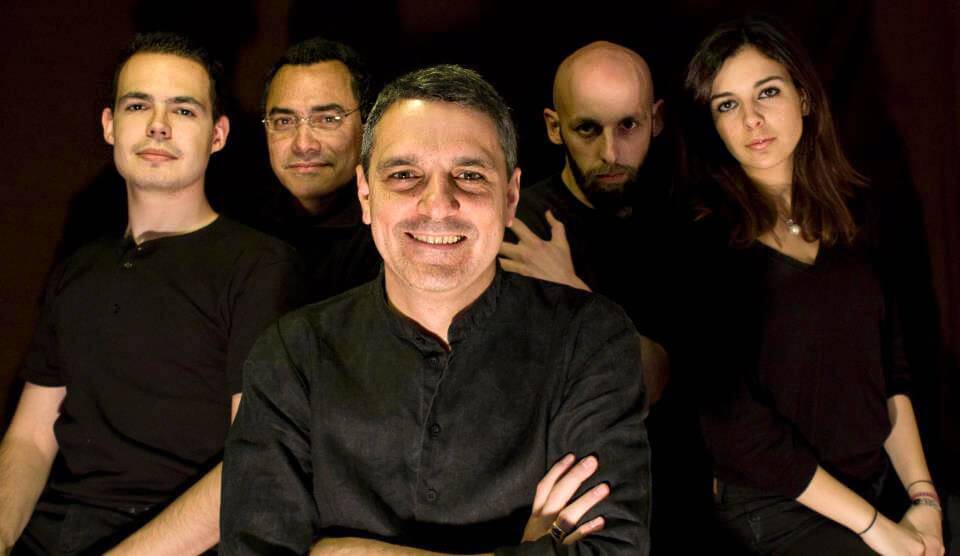 ‘Oneness’ starts beautifully in piano and synths atmospheres. It’s like floating in a boat, drifting in the dark in the middle of an empty ocean illuminated by a pale moon. This track’s concept “rather than ‘connected’ we are really one. Like waves in the sea…” can be ‘felt’ throughout the song. There’s an element that keeps everything together like a silver lining, tracing and uniting all the elements of the song (and the suite I’d say).  It contains everything we’ve been hearing so far. Again drums and percussion reach a more fronted role, carrying the direction and instead guitars and keys following suit with their own rhythmic percussion, even maracas join the game. Guitars and synths offer atmospheric fillers which develop into melodies, but even these are based on the percussion flow. And as Kotebel has already shown before, the whole flow comes to a sudden end, giving way to synths that could – again – be part of any Wilson work, and then you get a fit of just 20 seconds of guitar lead to remind us how important Genesis’ and Steve Hackett’s guitar-style might have been for the musical upbringing of García Forero. Perfect climax closure, like dripping drops sinking in a vast ocean. Beautiful! ‘Cosmology Suite’ is indeed an awesome effort to describe musically such vast and complex concepts!

Now entering the second part of the album, we get a more varied mix starting with ‘Mishima’s Dreams’ a García composition, where guitars have a more prominent role. A straight progrock song, it somehow lacks the complexity from the previous songs, but has a more direct approach. The complementary synths and mellotron atmospheric sound reminds me a lot of Swedish Änglagård or the instrumental parts of their fellow countrymen Anekdoten. Dark in vibe but with a velvety texture given by a soft clean organic sound of the guitars.

‘A Bao a Qu’ (a legendary creature described in Jorge Luis Borges’s Book of Imaginary Beings), begins in a display of atmospheric synths and piano like a movie soundtrack, until the afro-caribbean rhythms come again instead of disrupting, to compliment the dark mysterious melodies from piano and electric guitars with that Hackett vibe. A very pleasant, easy to listen song.

Next is the remastered version of ‘Canto XXVIII’ a piece César García Forero wrote to be part of the extraordinary project by Colossus & Musea Records, ‘Dante’s Paradiso’ (released in 2010 as part of Colossus’ Divine Comedy project), where different progressive artists and bands from around the world are present with a song on these massive work of music.  A beautiful piece where again the core of Plaza’s music is highlighted within electric and acoustic guitars, and atmospherics background synths. To hear this piece before finishing this album, brings a bit of a shock, to realize how much Kotebel’s music and musicianship has evolved and advanced through the years. I don’t mean it is a bad song, but sometimes it sounds a bit forced, though still carries the line of Kotebel’s unique sound and Plaza’s great composition skills.

This almost perfect album closes with ‘Paradise Lost’, dark synths atmospheres and piano. Dark slow melodies to tell us we reached the end. Just like that. It’s over.

What an album! Barely a flaw, barely a down turn, barely a moment to turn around, to look somewhere else. Hooked from start to finish, this album is simply put: a masterpiece. The only weak point I’d say is the inclusion of Canto XXVIII that doesn’t really fit with the flow of all the songs (including the songs outside the “Cosmology Suite”). Nevertheless this album is DENSE, it is complex and it is superb! If you have never heard of Kotebel before, please run and buy this album, then go back and check the rest of their discography. You will not be disappointed as you will be getting immersed in the music of one of the best progressive rock bands out there!