Prognosis Festival was introduced in September 2018 with a simple phrase: a new festival is rising! Following shortly was the announcements of acts such as Haken, Leprous, Soen, TesseracT, The Gathering, Alex Skolnick Trio, Nosound, Cog, Green Carnation, Our Oceans (who eventually cancelled but was replaced by Devin Townsend), Prognosis (echoing the festival name), Jo Quail, Wheel, Letters from the Colony, Sleepmakeswaves and the Golden Caves.

Quite the bill right? But Prognosis Festival had quite the ambition and rose the bar even higher announcing clinics, conferences and an art exhibition. And as icing on the cake, Leprous was to play “The Congregation” in its entirety, The Gathering would play a special “Auto-Reverse” set and Devin Townsend would offer an acoustic show (as part of his acoustic European tour).

17 bands over 2 days playing on 2 stages, one main stage allowing 1200 persons and a smaller one for 350 persons. Needless to say that with such a programme, the anticipation and expectations were very high: for a first time edition, that was a hell of a challenge to pull off!

The Progspace attended the festival with 4 reviewers (Van, Matt, Rune and Pauline) and this review is a collection of their opinions and thoughts about Prognosis Festival 2019. 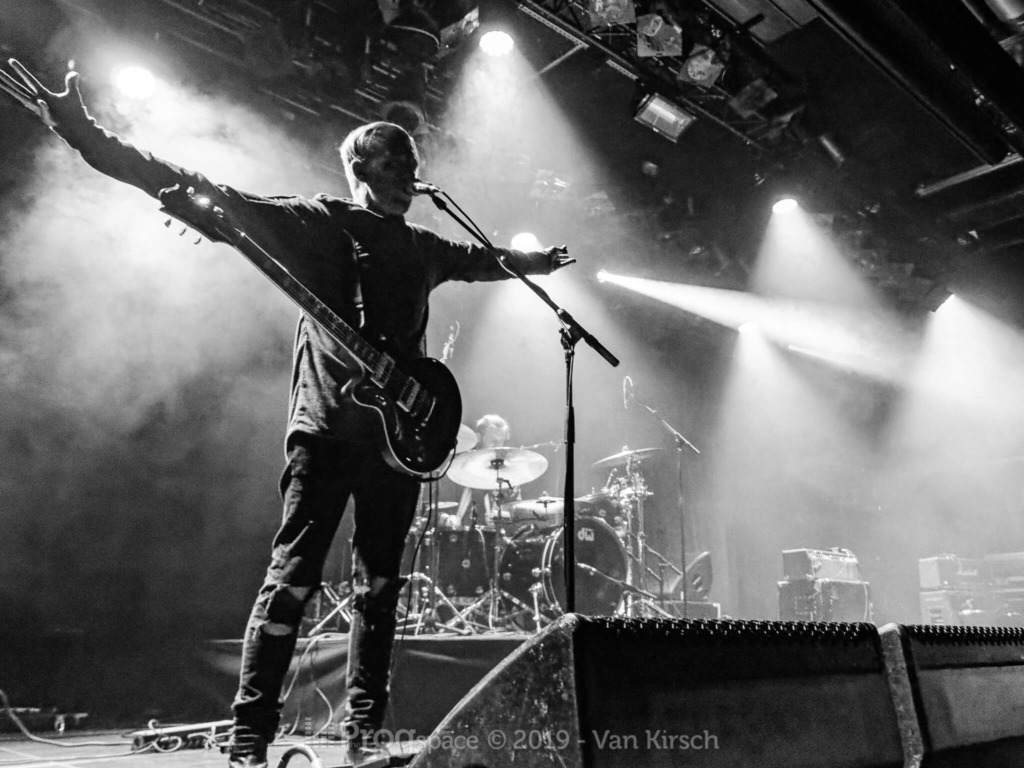 Kicking off the festival were Wheel from Finland. The smaller room was well filled right from the beginning when they started playing their atmospheric, toolish music on the sparsely lit stage. They sure seem like a perfect match with Soen, who they have been touring with earlier this year and will be again in late summer.

It seemed like not too many in the audience knew them (which is not surprising given they only just released their debut album), but as the room was getting more and more packed it was obvious that they hit a nerve there, and gathered some new fans on the spot. A good moody warm up for the evening and a band to check out closer in the future. 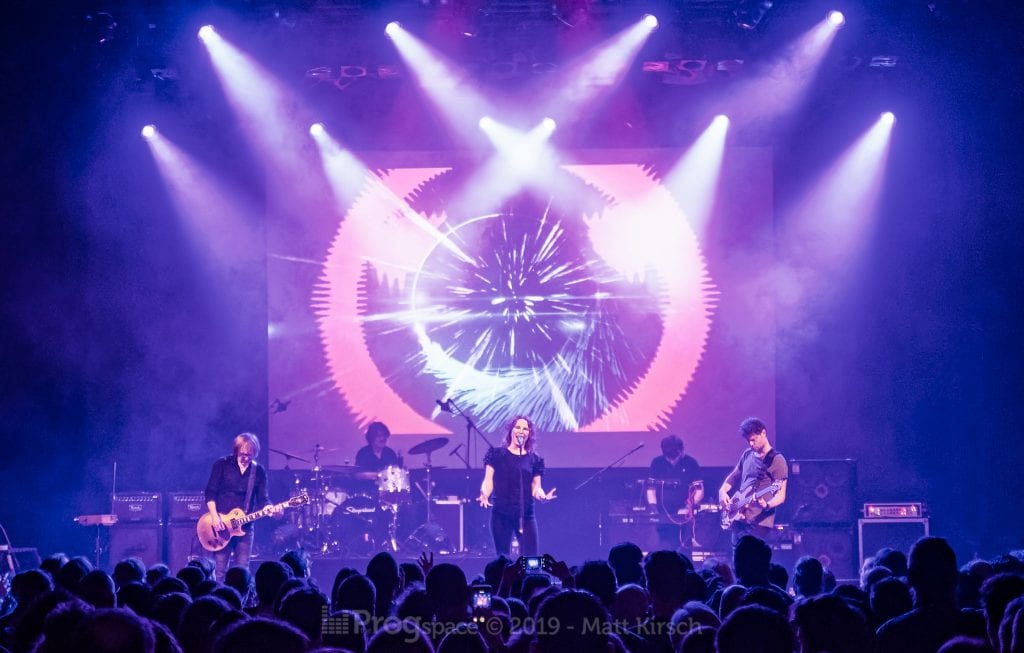 A special “Auto Reverse Set” was what we had been promised from Dutch veterans The Gathering as they entered the large stage this Friday. Their show last year at Midsummer Prog was only moderately impressive, but  their performance at Prognosis was much more enjoyable, and a big part of that was the selection of the set this evening.

Starting out with a couple of tracks from “How To Measure A Planet” the band quickly treated us to several other classic tracks, such as the beautiful ‘Eléanor’ from ‘Mandylion’, ‘Saturnine’ from “If_then_else”, and ‘Nighttime Birds’ from the album of the same name. Vocalist Silje Wergeland was glowing on stage, and in many ways made up for the immovable, less charismatic presence of the rest of the band. All in all this was a lovely trip down memory lane. 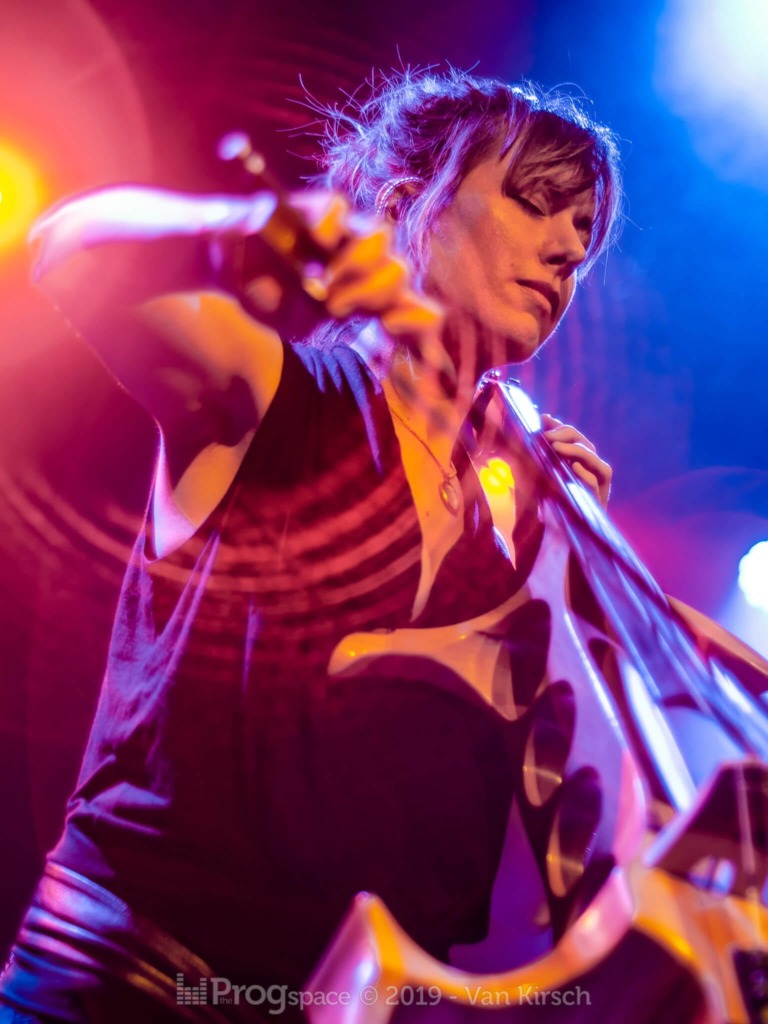 And then, down at the small stage, we were in for something really different. Jo Quail does not make progressive metal as most of the festivals bands, but creates something else truly progressive with nothing else than her cello.

From calm, moody soundscapes, resembling the ocean, she went to full thunderstorms of music, sounds, feelings – things that are hard to imagine to come only from a single instrument – bowing, plucking were the more obvious ways to play it, tapping and drumming were added on top.

While it might not have been everyone’s cup of tea it was a nice change to the rest of the line-up, and very sympathetically presented by Jo Quail, who also didn’t lose her mind over a technical problem at the beginning of the set. Those who came down to the small stage to see her play certainly were mesmerised and almost completely silent while watching the set. 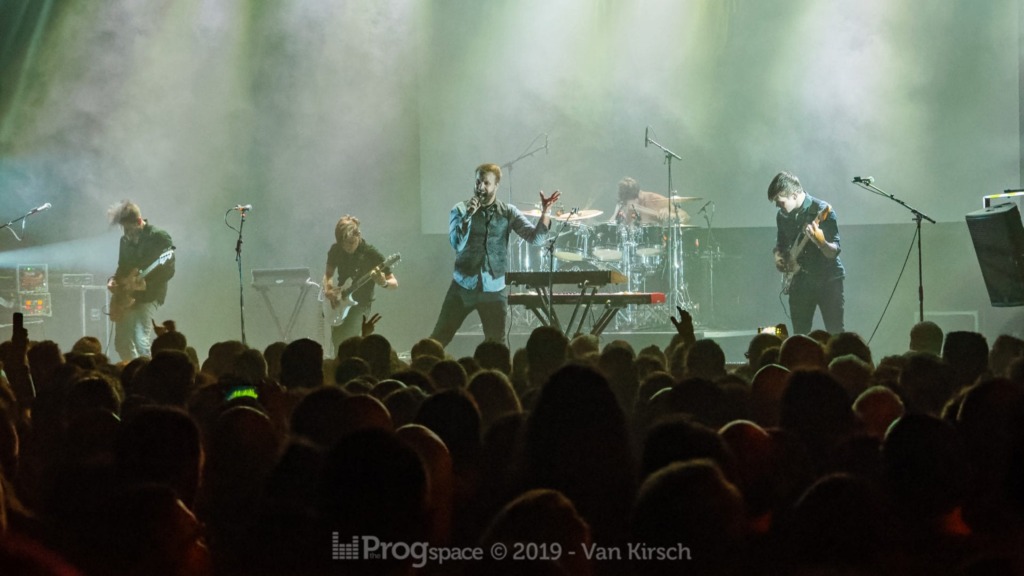 What can be said from a show of the Norwegian progressive masters that have not been said before? Leprous delivered a near to perfect show. Perfect sound, perfectly synchronised lights, an impressive vocal performance by Einar Solberg and a perfectly geared up band working smoothly like a well oiled machine.

Fans always play a major role in their shows, and this was no exception: as expectations were very high after Leprous announced their show was going to be “The Congregation” album in its entirety, including the never played before ‘Within My Fence’,  fans literally crowded the main hall (fitting 1200 people).

After the band finished their main set of “The Congregation” album, they came back for more treats to their already blessed die-hard fans, adding up 3 songs from their regular repertoire: ‘The Cloak’, ‘Stuck’ and the already anthemic ‘From The Flame’ (from their albums “Coal” and “Malina” respectively). Leprous bespoke with their performance why they are one of the hottest metal acts of the moment, and why you should not miss their shows whenever they play near you. 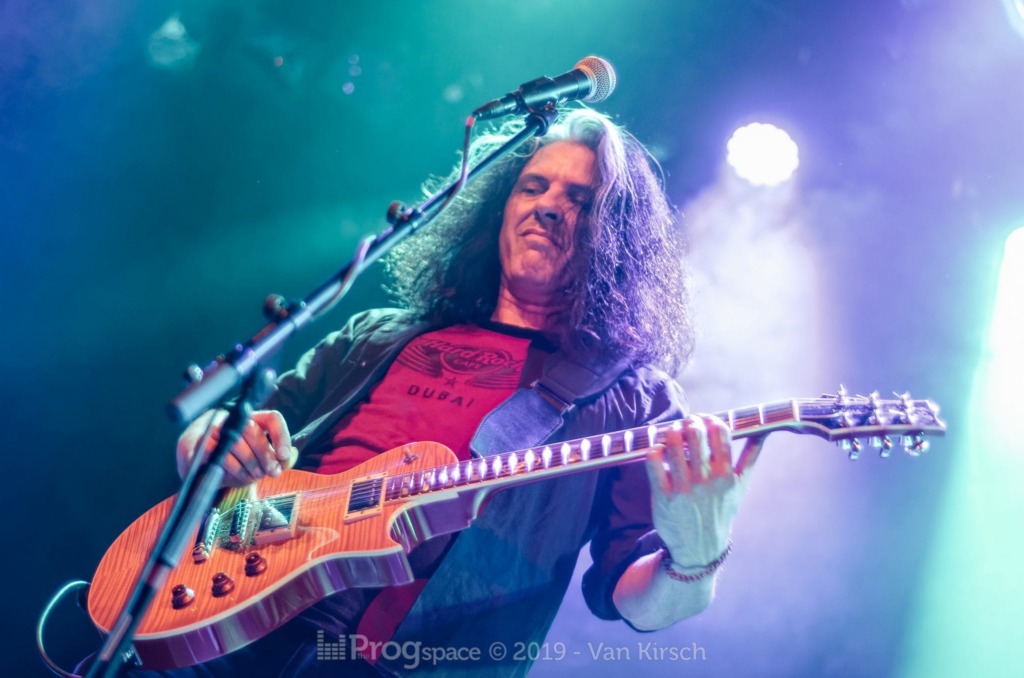 Downstairs, The Alex Skolnick Trio took to the stage in front of a decently sized audience. Skolnick is without a doubt mostly known to metalheads for his involvement with veteran thrashers Testament, as well as Savatage, and the related Trans-Siberian Orchestra. What the three musicians offered us here was a far cry from those bands, and initially Skolnick was stating, almost apologetic, that the trio was “perhaps the least prog band on the bill“. Well, we would have to disagree. The refreshing mix of styles and remarkable talent on display was definitely both progressive and impressive.

At the end of the 90’s Skolnick started training to become a jazz guitarist, and more recently he has been involved with world-music. All of this, and in addition folk/country, classical and of course hard-rock, could easily be traced in the trio’s music. We were treated to great, and surprising versions of the Aerosmith classic ‘Dream On’ and Deep Purple‘s ‘Lazy’, as well as fantastic original material like the upbeat ‘Culture Shock’ and the multi-faceted ‘Conundrum’ from the 2018 album of the same title. Definitely one of the highlights of the weekend, and a great booking by the festival organization.

First things first: why such a big name in the prog-scene as Soen were booked to play on the small stage couldn’t be grasped by many who visited Prognosis Festival. It is understandable that in festivals like these, conflicting schedules between touring bands might arise, making it impossible to move a band to a different time or day, but in this case it was obviously a very bad choice to place the Swedes in such a small hall, when they were clearly one of the “must-see” bands of the day.

This created a huge problem when crowds lined up to enter to the point that organisers had to warn people from leaving “at your own risk” (if you left the hall, you wouldn’t be able to come back), it simply was too full, that they had to stop more people from entering, thus many people missed the show. Luckily Van was able to be on time at the front to capture the action on stage.

As expected in such a solid band their performance is always as tight as if they had many decades behind them. These very fine musicians know how to express from the deepest emotion their music transmit, to the extensive palette of rhythms by Martin López and the raw but melodic string sounds.

Joel Ekelof never stopped smiling despite taking the audience through all the range of emotions from each note he produced. From the moment the band stepped up on stage, the energy from the very tightly packed crowd went back and forth between band and crowd. The Swedes were thoroughly enjoying themselves, and made sure the people did as well. I’m sure this show will be in the memories of the band members for many years. 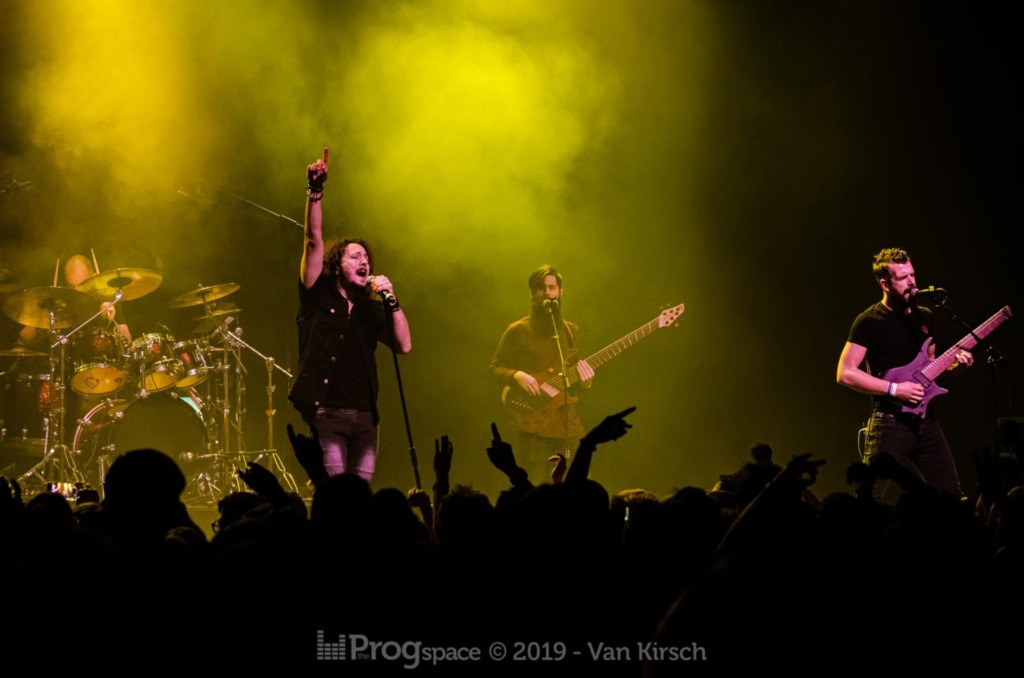 Having run a very steep flight of steps from the small hall to reach the big hall on time to snap pictures at the very crowded photo pit, we made it to witness the amazing closing to the first day of the festival at the hands of the 6 gentlemen of Haken. At first the hall was not as crowded as with Leprous, but as soon as Soen finished, almost not a soul fitted in the main hall anymore.

Haken gave one of the best shows we’ve seen from them. The venue was bursting with electricity, perfectly apt for the opening ‘The Good Doctor’ from their most recent album “Vector”. The extremely technical but very creative and fun band dropped song after song mainly from their last 3 very successful albums.

Ross Jennings gave a master class for any front-man to be, delivering a pitch-perfect vocal performance while running all over the stage. Diego Tejeida delighted fans when he stepped to front the band during a solo with his skulls-pimped-up keytar. The rest of the band as usual tend to be screwed in to their places in full concentration on the very technical music, though Conner Green went to the front several times to show off his masterful skills on the bass guitar.

Haken delivered the perfect closing for a sold out first day of this first edition of Prognosis Festival with their 20-minute masterpiece ‘Crystallised’. At this point it seemed difficult any other band would top one of the best shows of the first day.

Hailing from Trondheim, Norway, Rune has been a fan of everything hard and heavy since he got his first real taste of music in the early 80's. Originally a fan of the more extreme genres of metal, like thrash, death and blackmetal, he always enjoyed the more technical, progressive and avant-garde side of music. When he's not working, collecting and listening to albums, or attending concerts, Rune enjoys one of his many other nerdy hobbies, including games, comics, and sci-fi and fantasy literature.