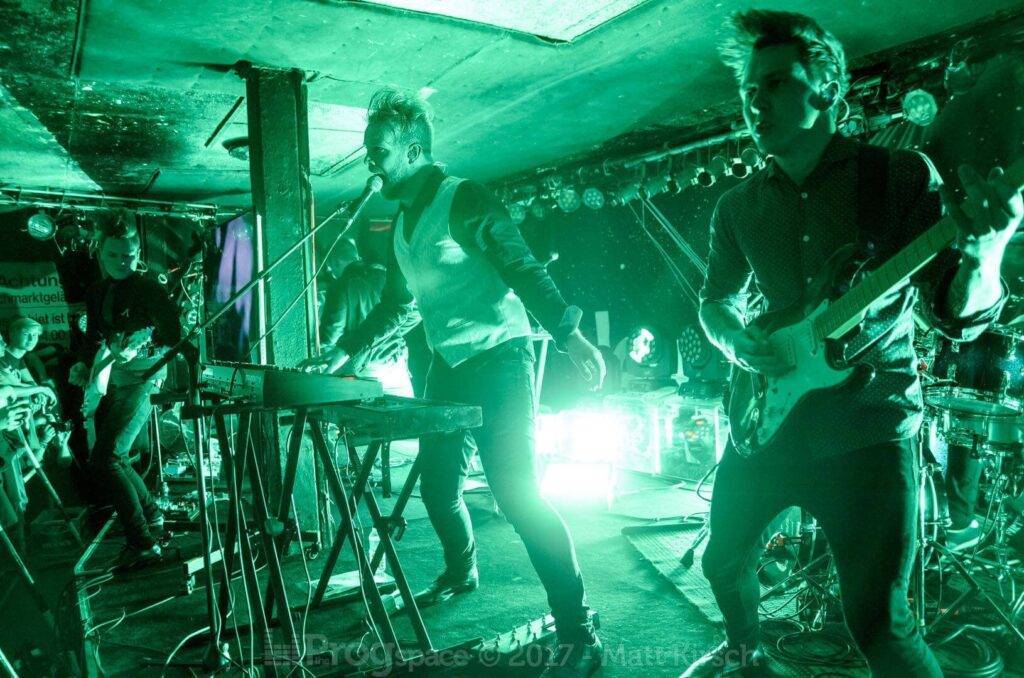 With their fifth studio album, “Malina”, Leprous upped their game once again, and such a brilliant album could only be topped by an even more ambitious tour, with arguably the best progressive tour package of 2017: Five weeks, from Russia and Scandinavia all the way through Europe, with a list of support acts that is as diverse as Leprous’s music: Island’s finest Agent Fresco, Alithia from Australia and their fellow Norwegians from Astrosaur. The Progspace visited several of the shows,  in Hamburg, Oct 29 and Munich, Nov 17 (Germany), and in Aarhus, Nov 23 (Denmark), and here is what our editors thought of them: Hamburg was the first stop in Germany, and the show in the famous but tiny Logo club also marked the first sold out show of the tour, with many to follow. The venue was clearly too small and uncomfortable for all but the opening act Astrosaur, and that’s probably because they’re a trio. Musically, they stayed very true to their name, if you associate the ‘astro’ part with post rock elements and the ‘-saur’ part to sludge and doom elements. In each show The Progspace visited, the crowd was rather enthusiastic for an instrumental band opening for bands that completely revolve around their vocalists (even at an early start in Munich at 6.45 on a friday evening). Mind you, guitarist Eirik Kråkenes is not a nobody in the Leprous family since he filled in for Øystein Landsverk on the tour supporting Devin Townsend in early 2017. The quality the three delivered on was accordingly high, and their unique take on instrumental post rock was even able to convince music fans who find this particular subgenre rather boring usually. Next up were Alithia from Australia (who later skipped the Aarhus show) and suddenly the stage was crowded with double the people. In Hamburg this provided quite the challenge, with that infamous column standing in the middle of the small stage. But everything fit, somehow. So it went from full on “how much noise can we create with 3 people” to full on “how much noise can we create with six to seven people”. Their kind of noise was inherently different to Astrosaur’s though, creating some strange kind of psychedelic party. Even though their performance exceeded the expectations after listening to the album beforehand, the sound in Munich was terrible and so their enthusiasm on stage fell flat unfortunately. Luckily, in Hamburg the sound was excellent, and Alithia turned out as the surprise of the evening for many who hadn’t heard a single song before. Their stage antics and the raw intensity of their music and performance, balanced by guest/replacement singer  Marjana Semkina (Iamthemorning), was something to behold though, and in Hamburg it also transmitted to the packed crowd. Alithia invited the acclaimed Russian singer to fill in for their original singer who was sick and had to remain at home in Australia. It was an interesting mix that worked out surprisingly well.

On to the co-headliners from Iceland, touring their masterpiece that is “Destrier” already for well over two years. The live energy the four guys of Agent Fresco bring is simply unparalleled though, even with stand-in bass player Nicolai Mogensen from their Danish brothers Vola. They were on a high for this tour, even challenging the headliners for the best show of the night in Hamburg. In any case (and as always) they gained a lot of new fans. But also for those who knew them already, they had something in store: A new, unreleased song. If the rest of the songs can hold this standard, we already have a heavy contender for album of the year 2018! With the setlist thriller Leprous brought upon their fans from the very start of the tour (surprising fans with different songs for every show), the tension and anticipation was incredibly high for every show. And as amazing as Agent Fresco are, when Leprous entered the stage to an extended Cello intro courtesy of Raphael Weinroth-Browne, they immediately made it clear who is the boss in the house with the opening double ‘Bonneville’/’Stuck’. The set-up in Hamburg’s Logo had been a bit of a challenge for the crew, as several large screens were part of the whole production. One of them (and the biggest, by mistake) ended right in the middle at the front of the stage, making it difficult for those who got the (until then) best place in the audience to see much of the show. In Munich, the circumstances were not the best either, as a sold out STROM Club means little to no sight for those further away from the stage than five to ten rows. So the visual production values such as the screens were almost completely lost for most of the audience. It was in Aarhus with the pleasantly wide stage of Atlas, when they finally could be fully appreciated. Front of House extraordinaire Chris Edrich proved his worth once more, conjuring a crystal clear sound out of nowhere (though very loud in Munich).

After the two opening songs that stayed the same throughout the whole tour, the surprises started.  In Hamburg, ‘M.B. Indifferentia’ made its second appearance of this tour- a rare gem, that slowed things down a bit. but then rewarded everyone with that epic finale. The first big one in Munich turned out to be ‘Salt’, as well little to never played before this tour but the first emotional climax with Einar Solberg at the top of his game even after weeks on tour without a day off. Aarhus fans on the other hand were spoiled with Bilateral’s ‘Aquired Taste’, which doesn’t get too much live playing time these days either. ‘The Price’, Baard‘s favorite ‘Illuminate’ and ‘Rewind’ (in either the full or the short version) were played in all shows we visited and business as usual for Leprous, but make no mistake, that still means so much more than most bands offer nowadays. Overall, it felt a bit like Hamburg got the short end of the stick though, with the softest and shortest setlist in the whole tour, also lacking the majestic ‘The Last Milestone’. Munich got more lucky: After ‘Malina’, which already hinted at the free flowing form that was to follow and made the eyes well watery already thanks to Einar’s heartfelt vocals, little could prepare the crowd for that flood of tears caused by ‘The Last Milestone’, performed by only Einar and Raphael. Jaws were on the floor after this one, which is valid for all the shows though, as the whole band, including guest Cellist Raphael Weinroth-Browne gave their everything, as proven when picking up pace with ‘The Weight of Disaster’. A song that really deserves its title, such is its impact.

Nearing the end of the Hamburg and Munich shows, Leprous pulled out another rare surprise out of their sleeves: ‘Lower’, also a rather slow gem that made the metalheads restless, but the true fans happy. Then it was finally time to go crazy: ‘Mirage’ and ‘From The Flame’ made all three venues boil, the former being even more powerful and absolutely rad live than on record, and the triumphant hit single ‘From the Flame’ being sung by some hundred lungs. Ending with another sing along favorite:‘The Valley’, the Hamburg show was over too soon, while in Munich ‘The Flood’ made parts of the audience freak out completely and start a moshpit. A moshpit! At a Leprous concert! In Aarhus the crowd didn’t let them leave before one final encore. The band came back with a special treat for the supportive audience: Rewind in its full version! With all the surprises, strong support (or co-headliner) acts and a Leprous performance that seemed out of this world, the “Malina” tour ranks on the top of the list of 2017, for some (like our Munich reviewer Dario!) even leaving behind the likes of the Ayreon Universe shows and Shattered Fortress, both among the highlights of the concerts roster of 2017 in Europe. Leprous are superstars, and deservedly so. Hopefully playing bigger venues on their second leg of the “Malina” tour, which we all hope for after the shows in Australia, Japan and North America! 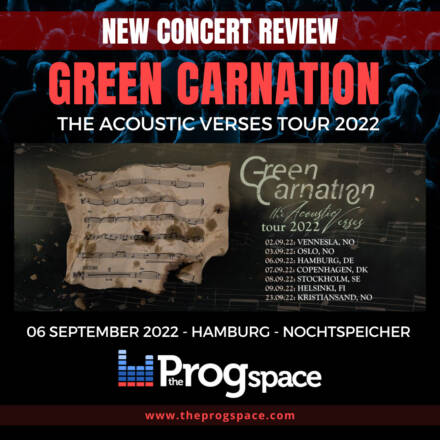 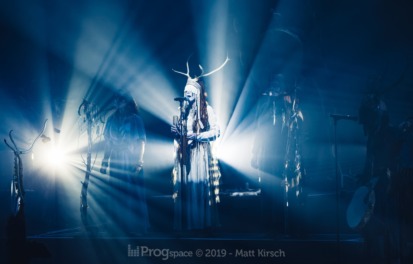 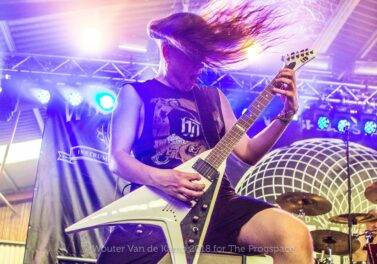 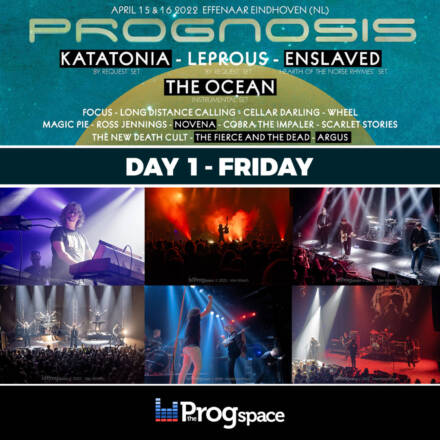