Hey Alex, Brutai released their first self-titled EP back in 2013, but I’d say it is still fair to call you a rather new band – would you like to present the members of the band? And where are you all from?
We are myself, Alex Lorimer (Vocals/Keys), Felix Lawrie (Vocals, Guitar) and Henry Ryan all hailing from South East London, Mathieu Bauer (drums)  from Toulouse in France but residing in London and Christian Sturgess (Bass) from Reading.

How would you describe your music, for someone who hasn’t heard your songs yet?
A fresh blend of easily accessible modern metal. We have tried to create a sound that is new and appeals to people who listen to all different types of music. Huge groovy riffs, massive hooky choruses, complex rhythms and immense vocal productions.

How do you think you developed your sound to what it is today?
The EP released in 2013 was a good building block for the transition to our new release. I guess we’ve taken that structure and developed it through having learnt new ways to craft songs but also the addition of 3 new members who have all come from very different musical backgrounds has just thrown a load more ingredients into the mixing pot. For us, that’s the main element of why it has come out so well is that we feel between us we have all bases covered.

Where do you come from, musically speaking?
Henry, Felix and I all happened to be in the same class at school from 11-18 where we would spend our music lessons coming up with really cool riffs and we always had an obsession with vocal harmony. Both Felix and I had very musical upbringings with his auntie being Lulu the Scottish star and his father Billie a very successful songwriter who wrote for the likes of Tina Turner and Lionel Richie to name a few. My father was a trumpet player who toured for years with Clapton, The Who and the Rolling Stones. By chance he also played with Lulu, so small world! We both had very popular music upbringings. Mat came from a very different background, his Uncle is a very well-known percussionist in France and that inspired Mat to start with Classical percussion, as he got older he moved into other types of drumming such as Jazz, Blues and that helped develop the real groove that he possesses on the drums. Henry started off as a classical guitarist and the skills he learnt through that helped him create this wonderful sound as a lead guitarist, he really has a unique writing style. Christian works harder than any of us, the guy is obsessed with his instrument and plays it religiously. He has always been probably the biggest metal head out of all of us and he’s always looking for new ways to push it to the next level.

Judging from the songs on your upcoming debut album Born, there are quite some diverse influences present, aren’t they? Can those different roots be heard in the songs?
We often are asked to describe what genre we would be and who we sound like. It’s such a difficult question because ‘diverse’ really nails it on the head. There are parts that could lands us in any of hundreds of categories, especially with the sub divisions of every category these days. And we have parts that have taken influence from so many artists. From Michael Jackson to Killswitch Engage, when writing we always have an open mind to take a different direction and tap into another style or sound we love. Each song really stands out on its own musically and has a particular sound that defines it but ultimately together creates the overall journey of the album. I like to think you can tell that there really is a blend of so many roots we gained musically in such different musical upbringings. I think the addition of a lot of electronic sounds and not setting and boundaries in terms of vocals has allowed us to take the music to a place it maybe could not have gone had they not been there. 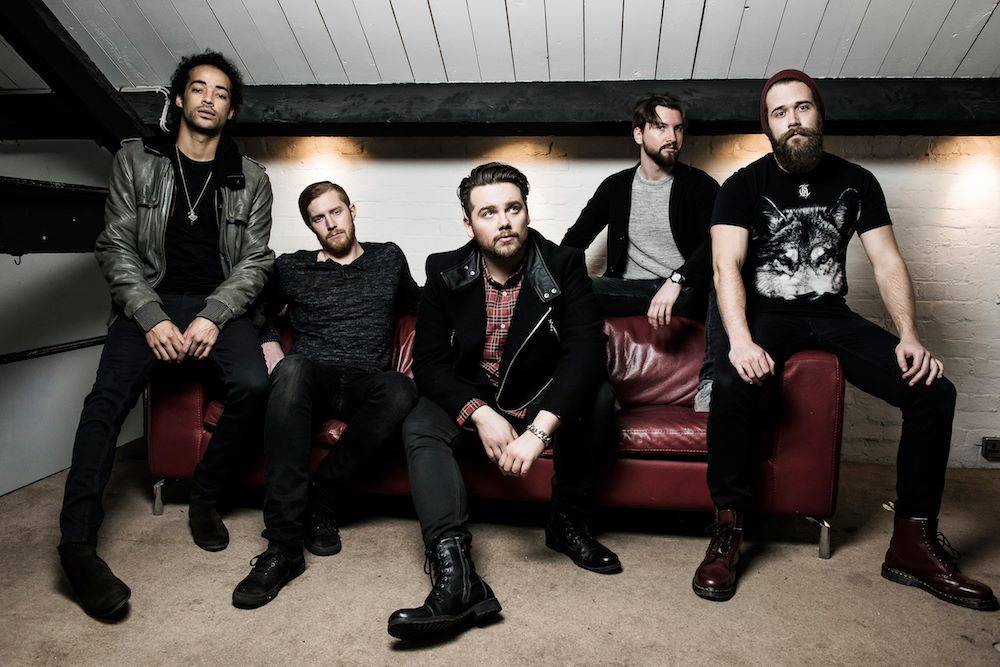 Did you all give a special flavor to them, or did you already have a specific sound in mind when you started writing?
As I said before the EP was a good starting point but with all the new members it would have been foolish not to allow the creativity to flow. With this group of people and the support group of family and musicians around us we had a chance to break the mould and try and write something unique that had a little something for every listener but even if you as a listener did not like the sound necessarily you still couldn’t argue with the song writing. I think in part this is why it took such a long time to finish as that doesn’t always just fall into place, sometimes you just have to work hard get your head down and wait for that bit of magic to click.

So the great day is just ahead – next Friday you’ll release Born, your first full length album. Do you have anything special planned for the release day?
We have our album launch party on the 22nd, tied in with our label Transcend Music’s Xmas party. We’re playing alongside some great bands and all our friends and families are coming to celebrate with us down at The Borderline in Soho. I’m sure a bottle of champagne or two will be popped, it’s been a long time coming!

The first songs from Born have been out there since a while already – how has the reception been so far?
The reception has been amazing so far, we couldn’t have been happier. Since the release of ‘Deep’ things have really snowballed for us and so many opportunities are being thrown our way. From playing the Sophie Lancaster stage at Bloodstock to heading out on tour in January with Devil you know (Howard Jones ex. Killswith Engage).
We’ve signed to a really exciting up and coming label and nailed down a publishing deal. I think of all of it the part that makes us most excited is that people are really getting the music. The reviews are great and the thing that’s happening which was a huge part of what we wanted to achieve is that people who don’t like or really listen to heavier music usually are loving the singles. I think the ultimate reward is being able to connect with people.

Speaking about a long way coming – the way from your EP to Born was not the fastest. It seems like you would have liked to have it released earlier. What happened?
Whilst we loved every second of writing and recording the album, there were some pretty difficult times. We all work full time jobs and everyone has different days and hours which becomes a problem at times. Then there were other personal issues that get in the way, although that does help when you’re writing lyrics! Some days we’d get together and there was no stopping us, however other days we’d just sit there searching, sometimes for weeks for the right thing to happen. We were very close to dropping ‘Deep’ from the album until we decided to get a bit fun and playful with the keys and the vocals and it completely turned the song around. We have had it ready to release for a while but timing is important and we are lucky to be under the guidance of some very wise knowledgeable people so we’ve had to be patient, but now the release is just around the corner we are all incredibly excited.

How would you say the band evolved since recording the EP?
We’ve all grown as people, we treat the band as a business which means you have to work hard, yes enjoy your rewards but if you want to even have the smallest chance of breaking out, that means hours of graft. Musically we have just learnt and grown and you’ve got to be a sponge to be able to make the most out of your own ability. Listening and learning from others is as key as anything when it comes to becoming a great player and a great songwriter and we have been very fortunate to have been surrounded by people who have such a wealth of knowledge for all aspects of a musical career.

How do you fit your music into your daily lives? I reckon you still have day jobs to deal with, don’t you?
Obviously we live in a pretty tough time financially and the bills aren’t going to pay themselves so we all work full time. Music though to an extent becomes the first thing that you think of as your leisure. I mean we all love it and love being in each others company so it’s not a bad thing but if you want this to be your life you have to work at it every day. Holidays from work are not really holidays any more, they are days off for gigs and tour but it’s a sacrifice you have to make if you want to have that chance at breaking out and actually having music as your job. That’s a dream we all want and are willing to sacrifice for the pursuit. In fairness we all work jobs that we actually really enjoy which really helps with putting you in the right mindset when it comes to getting down to the business of music. But it can be a nightmare trying to get together to rehearse.

You already have a UK tour coming up in January. Will we see you playing on the continent as well, apart from ProgPower Europe in late September?
We hope so, it’s always been an ambition of everyone in the band to take our music to every corner of the world and share it with people from every walk of life. There is a great metal community in many European countries and those are the people you want to play to, as the atmosphere at the show is just next level. Saying that though, even if we didn’t we are over the moon to get to play ProgPower, it’s been on our bucket list for a couple years and it just sounds like the most incredible festival and such a unique experience we can’t wait! The Progspace Q&A with Voyager