Few times I listen to an album, and when the last note fades, I’m sure this album will be in my top 5 of the year. This is exactly what happens every time with “The Persistence“. Yes it is THAT good. Kingcrow is a band that without much noise in the prog world, have slowly established themselves among the best out there. Already their previous album “Eidos”, released 3 years ago, was among many “best of” lists worldwide. So after these 36 months, the 5 Italians have worked hard to make sure you will have in your hands one of the best Progressive releases of 2018.

Already the first song is not only an amazing opener (if not the best I’ve heard on any album this year, or even in a longer time), but foreshadows the incredibly good album that lies ahead.
‘Drenched’ opens with an intro of heavy guitar riffs and ambient keyboards setting the mood for the song. Diego Marchesi enters, sounding better than ever. Let’s stop here and highlight this: it is time Diego is recognized as one of the best prog vocalists out there. His vocal range is wide enough to cover lows and highs with ease, and it is so easy to understand every word he sings, bearing in mind his mother language is not English. The passion and energy he can fill his voice with, transcends to envelop the song and the listener, taking them to a new level. 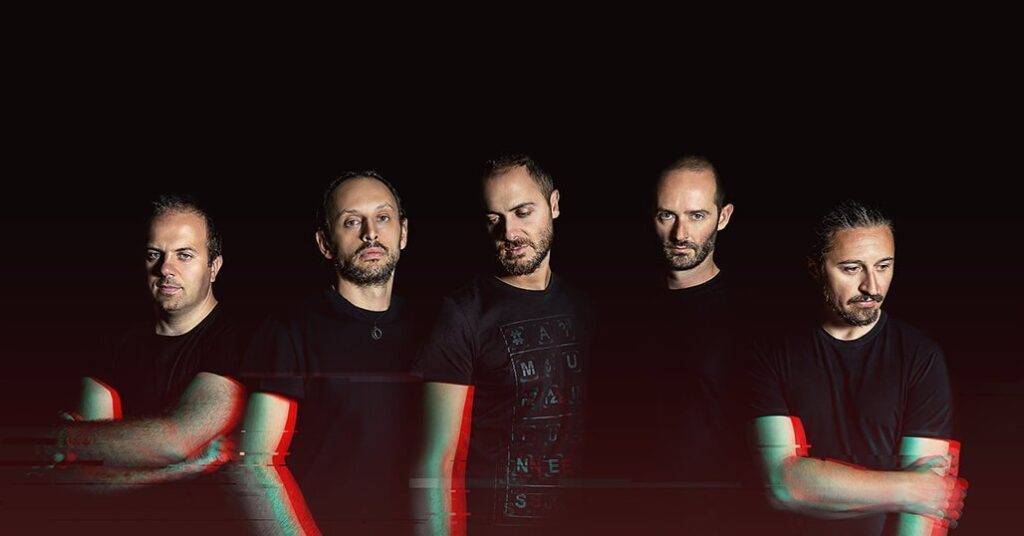 That said, ‘Drenched’ is an impressive song full of everything you can expect on this album: emotions, passion, energy. An excellent composition and musicianship without “showing off”, just the right notes, the right rhythms, the right length and the right burst of emotions and energy to open the doors to the wagon I jumped in when I clicked the play button.

After such an entrance, ‘Closer’ doesn’t fall behind as it is among my favorite tracks of the album. Cristian Della Polla‘s keyboards with some distorted effect mark the slow pace. Marchesi’s voice and the clean guitars of Diego Cafolla and Ivan Nastasi, playing a patterned rhythm, start this song in a sound that I dare to identify as quite close to what Leprous have been doing since “The Congregation” album. Quite a defined style I might say, bringing a dark atmosphere with simple chords and harmonization between keys and guitars and sometimes just the bass or the drums marking the melodies instead of only rhythms. Towards the middle, the song gains in atmosphere, reaching a peak to fall back to acoustic and clean guitars with emotive vocals, beautifully arranged to end the song on the same soft dark mood of the intro. Kingcrow has mastered this on this album and ‘Closer’ is the first of several songs in this album that shines in this style.

‘Everything Goes’ is a slow song beginning with keyboard effects, the piano serving as background for Diego’s voice. Creating a dense atmosphere, almost a cinematic soundscape when the clean guitar riff comes in… and then Diego.. uff! Diego’s voice once again bringing goosebumps. Few songs move me the way this song does. The background vocal arrangement, the guitar riff that reminds me of something I’ve heard before but fail to locate. Then the whole band in full and Diego taking in it all with his amazing vocal range. Distorted guitars take the lead in a simpler harmonized riff following a syncopated pattern. And suddenly that was it. 4 minutes of goosebumps. Do songs need a solo? No, definitely not.

At 7:03 min, ‘Folding Paper Dreams’ is one of the 2 longer tracks. Again a slow paced song but with enough force as not to be a ballad. I wish I had the lyrics to fully grasp the meaning behind them, but what I get is full of feelings and emotions, not only through words as every single instrument has a part on this. The build up is incredibly energetic. It reminds me again of Leprous in many positive ways, but it is still fully Kingcrow. The song ends in a melancholic mood basically with Diego singing almost a capella: “Folding paper dreams, what is left of us, still resounds”.

‘The Persistence’ is the longest track at 7:09, and first single of the band. This song is a power-bomb. I remember when the band released the video I was blown away and sure that this album was going to be high on my list. I was not wrong! This song is simply superb and brings in everything I know and love of the music these 5 Italians make. The massive sound, dark mood but energetic at the same time, how they play with the different rhythms and somewhat simple melodies but with those off beats, the raw guitar sound in contrast to the soft vocals… to end on keyboards playing almost a different song… just listen to it, you’ll know what I mean. How not to love this song?!

Again, it is impossible not to mention that that ‘Every Broken Piece of Me’ intro reminds me of Leprous, more towards what the Norwegian’s did on “Malina”. The sound effects from the synths and the distorted clean guitar simple riff create the perfect mood and background for Marchesi, his voice fits so well in this melancholic sound. But then we’re punched in the face with Diego’s highs and the band in full for the build up on the chorus. Thundra Cafolla‘s cymbals and drums mark the pace now, while Marchesi vocalizes above clean guitars. Then the chorus builds up to a midsection of keyboards and Riccardo Nifosì’s bass guitar almost bordering on electronic music, but the heavily distorted guitars remind us that this is progmetal, and of the best of the year! The atmosphere is electrifying when the whole band comes in a riff where guitar and keyboards sound so huge and at the same time can’t help to remind me of Steven Wilson‘s latest work. The song closes again with the same keyboards on that electronic bliss of the midsection. Perfect!

‘Devil’s Got A Picture’ is one of the most direct tracks on this album. From start to finish is a demolishing snowball of emotions, heavy guitars and pushing rhythm intercepted by few moments of respite to catch our breath. The whole band plays so masterfully with odd timing and breaks… building up to top it all with a bone-chilling scream. The song slows down with both Diego’s and Nastasi voices in unison complementing the electronic final beat.

‘Night’s Descending’ is the second single and maybe the song that was played and shared the most on social media, due to presence as guest singer of none other than Daniel Gildenlöw (Pain of Salvation), whose name drags masses. And not without reason, as anyone would agree Gildenlöw has one of the most enigmatic, energetic and fully recognizable voices out there. This song is simply perfect for him, and though Diego Marchesi is an awesome vocalist, his voice pairs perfectly with Daniel’s. Really, it is beautiful. Daniel really picks up on the emotional rawness of this song, it feels like scratching deep on ones skin. The build up of the main chorus melody is so perfect for these two guys. The song itself is pretty simple, but just the vocals do everything here, and how the song is arranged to turn your skin inside out.

‘Father’ is a very emotional song. The way Diego Marchesi gives his all reveals that it might be at least, partially autobiographical. Another track that really cuts deep for all of those with a difficult relationship with our fathers… It is not easy to write about this song as it does move every fibre on me (as if the album has not done it already!). For moments the song takes me to the verge of tears. The guitars and keyboard sustaining the mood of the song while bass and drums mark the pace while Diego’s cries slice straight through me. Towards the end keys creating the atmosphere while guitars, bass and drums mark the rhythm equally -again Leprous’s style- is the perfect ending for this hell of a song. UFF!

Piano and the beautiful bright voice lead here in the slow ending track ‘Perfectly Imperfect’. Thank you Kingcrow for choosing a slow paced song to end this massive emotional roller-coaster of an album. Best way to catch up my breath, dry my tears and reflect on the emotional path and painting of feelings “The Persistence” has gotten out of my every fiber. But of course, the song builds up to a climax that also represents the climax of this album to then fade to silence.. and here I am… staring at my pc’s desktop, blank. Just trying to dig in everything I just passed through.

Yes, perfectly imperfect, we all are, as well as this album is. But for me this emotional journey Kingcrow took me in, is as close to perfection an album should be. And I’m not talking only from the musical point of view, but as well production and mastering, a point I tend to fail to mention on my reviews, but in this case I feel is out of the norm, because it is so perfectly clean! Few times I can hear literally everything without any effort or extra attention, even when listening through my computer’s (not so bad) speakers system. Every note, every effect, from the raw distorted guitar to the distant electronic effects are audible, and help to create the intricate atmosphere this album dwells in. It’s just perfect.

I think I’m drained.  I need to stop here. Just please, do yourself a favor and buy this album. Support the band and if you’re in Europe, remember they’re touring with Pain of Salvation right now, so please, don’t miss them!