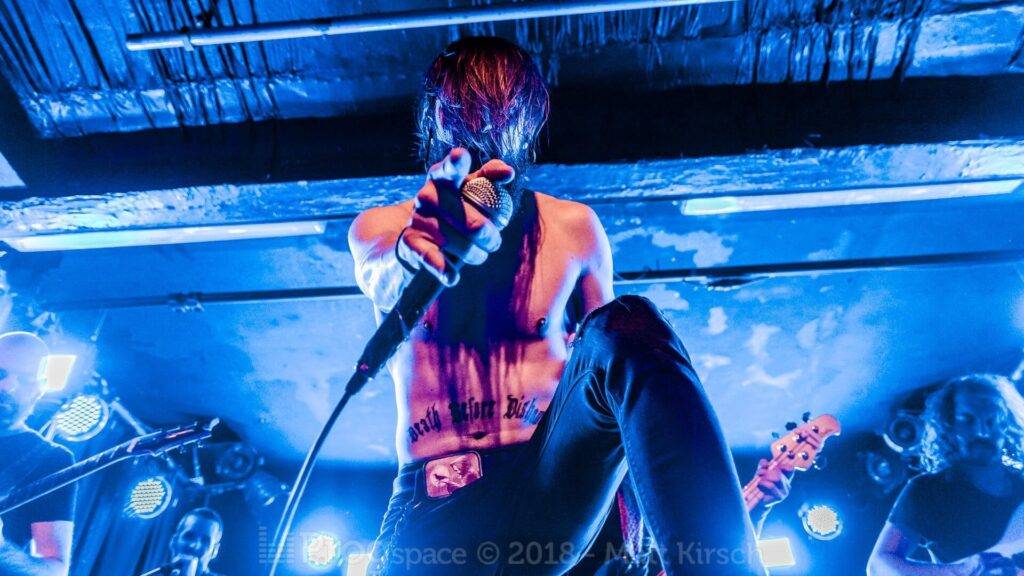 Just about one year after the first European leg of the “Aathma-tour“, Andorran Prog Death sensation Persefone is still riding the momentum sparked by this gargantuan masterpiece. So why not embark on another round with a brand new song in tow? I can’t speak for the other cities they’ve visited on both runs, but in Munich they got an upgrade to the next bigger venue and rightfully so! They might’ve even almost  doubled the size of their audience over the course of one year, which is quite impressive – and well deserved. In Hamburg, the northern German section visited the show in Hamburg’s Marx, the small club of the legendary Markthalle – which was the same location of the first leg – and very well filled.

In Munich, the concert evening was supposed to start quite early at 7:30 with a local support, not for The Progspace Munich writer though, as another episode of ‘damn I forgot the ticket for a friend at home’ forestalled his early arrival. According to trustful sources, nothing important was missed though. Still I wondered about the motivation of putting a local support band on top of a three band touring package. Ah well, especially since the second support band, Defecto from Denmark, didn’t strike a chord with me either. Granted, their relatively straight forward metal was performed with vigor and enthusiasm, it just seemed a bit out of place, bearing in mind the massive onslaught of complexity that was about to crash down on the Munich crowd. In Hamburg the crowd was almost enthusiastic as the band though – which might not be at the same technical level as the other two bands, but served very well as an opening act.

Finnish five-piece Oddland raised the bar already significantly from the get-go, winning over a lot new fans. Their unique take on prog metal somewhere between Opeth, Pain of Salvation, Djent and occasionally even scratching Zero Hour like levels of complexity, and all that mixed with a healthy dose of Finnish melancholy, might not be the most extrovert style of music, neither was the stage appearance of the musicians – who in Hamburg clearly met some familiar faces and had one or two good laughs on stage, breaking their otherwise very Finnish seriousness. But Marc Martins was gonna make up for it in the upcoming Persefone performance anyway, no doubt whatsoever. A thoroughly convincing performance of the Finns nevertheless and I’m sure they’re gonna gain more stage confidence the more experience they get. Ripping through five songs from the formidable debut “The Treachery of Senses” and three bits off the equally impressive follow-up “Origin“, the five Finns were running the full gamut from brutal complexity (or rather complex brutality?) to subtle beauty (with the help of a fretless bass) – and back again of course. Now they just have to finish that long overdue third album, it’s been far too long since their stunning sophomore effort “Origins” that was released in 2016. 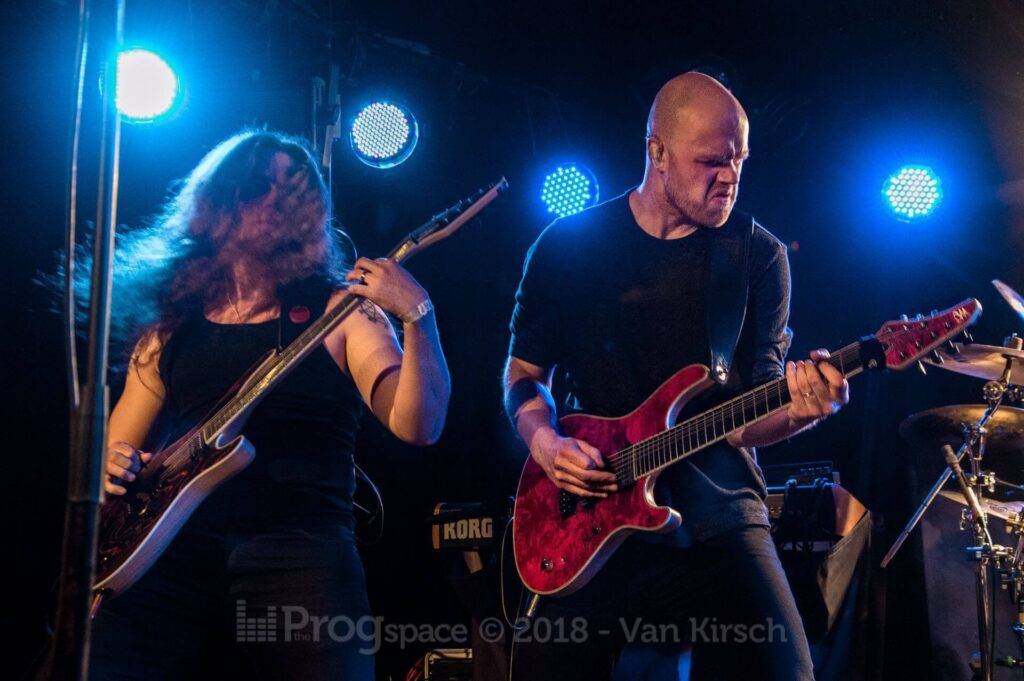 Hungry as ever, Persefone’s set this time around was much more focused on “Aathma” compared to the best of selection they had presented on the first run last year. But that didn’t stop the fans from frenetically welcoming the Andorran prog death masters. On the contrary, every melody was sung by some hundred lungs, every single one of the million guitar notes was absorbed in awe, with jaws dropping to the floor aplenty at the sight of the sheer talent and mastery on display. Putting my personal favorite on as second song already certainly did put a big smile on my face, but in all honesty, which song wouldn’t. The fact that Persefone released two flawless instant classics in the Progressive Death Metal sub genre provided them quite the comfortable situation when it comes to choosing songs for the setlist.

‘The Great Reality’ from “Spiritual Migration” and the title track from that very same album were welcomed with just as much enthusiasm as the ‘Cosmic Walkers’ and the glorious ‘Living Waves’ (oh these Paul Masvidal singalongs…). And if your jaw bones weren’t hurting already from constant awe, Persefone knew exactly what to do in that case. Half an hour into their set, they suddenly stun their audience with a finger-, neck- and mind-breaking live premiere of the new single ‘In L’akech’, where only the backing-tracks of guest vocalist and violinist Tim Charles of Ne Obliviscaris would have needed better adjustment in the live mix – optically the violin was very present in the hands of air violinist Marc Martins. And they were not done yet, they even had another live premiere up their sleeves. ‘Stillness, Mindless’ was at least as crazy as its predecessor in the setlist, even sparking in Munich the first of two circle pits of the evening. Marc Martins didn’t have to ask twice for it and promptly joined in. Hamburg, by the way, only got one mosh pit, but besides Martins’ two visits in the crowd, also guitarists Carlos Lozano and Filipe Baldaia joined the audience for a while.

The “Aathma” opening triple ‘An Infinitesmal Spark’, ‘One of Many’ and ‘Prison Skin’ simply put the nail in the coffin: Persefone are one of the best live bands out there these days. Their unique combination of mind-blowing complexity, a sheer abundance of energy and power mixed with melodies from outer space and some philosophical spirituality is highly contagious. Bookended by the epic ‘Aathma’ itself (“You are the Aathma itself“), this was truly a show for the ages, an eye (and ear-) opening display of virtuosity and if they manage to keep this staggering level of quality on the next album, it might just propel them to even greater heights. The sky is the limit. 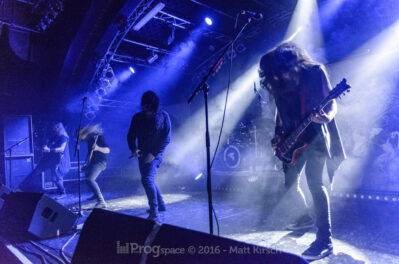 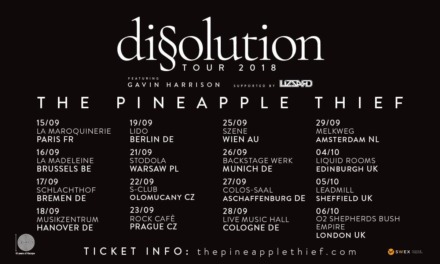 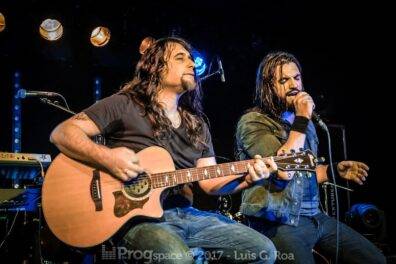 Textures with Extremities and Mother of Millions, Berlin 24. November 2017 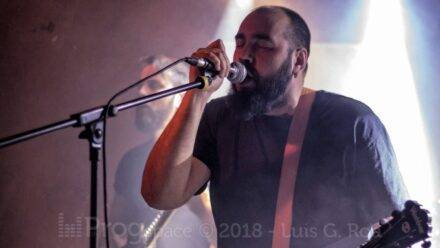