As if the hype for their seventh album “Aphelion” wasn’t big enough already, Norwegian prog posterboys of Leprous had announced to play the entire album in a live stream twice two days before the actual release. A unique chance for the fans to hear it in advance, and in a live setting at that. 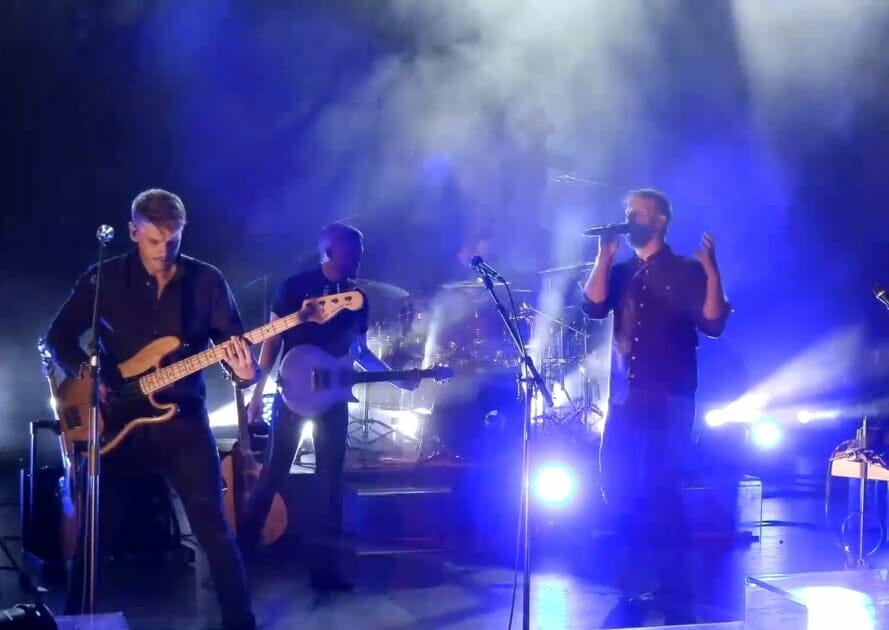 Jumping in with the ‘album-announcement’ single ‘Running Low’, after the obligatory ‘lead-singer-microphone-isn’t-working’ scare, everyone settled in smoothly for this challenging run of live premieres. Cello player and quasi-sixth band member Raphael Weinroth-Browne couldn’t fly in from Canada for this one-off date, but he was present on the backing track and also had a short video message prepared. Between the songs, frontman Einar Solberg treated us to very interesting insights into the songwriting process of the different songs, so we learned that he composed the basis of what was to become ‘Running Low’ came to him while hiking on the way to a mountaintop in the beautiful region of Telemark. So he recorded it quickly on his phone before hurrying to catch up with his hiking group. But in the end, it wasn’t as spectacular as it might sound, according to him. Well, at least he left us with a piece of  advice about creativity: you can’t wait for it to happen and it doesn’t just fall into your lap when you want it to. 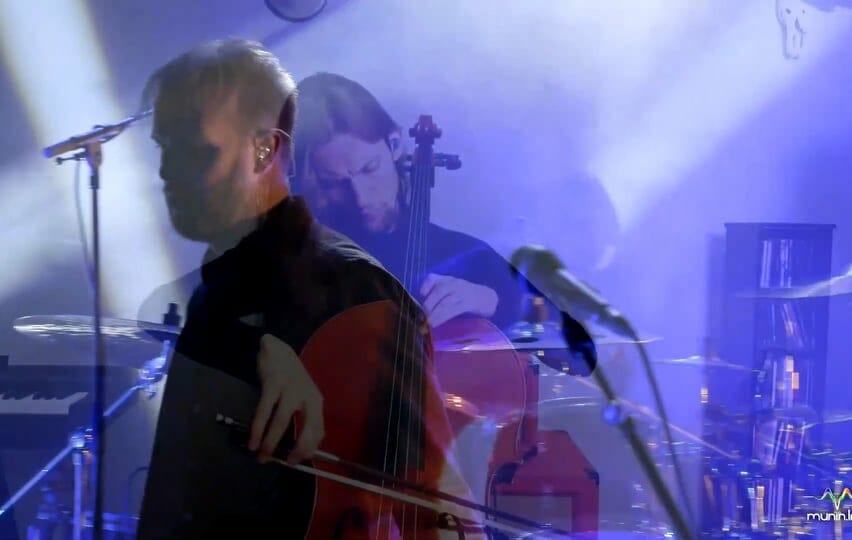 Moving on with three songs that were brand new for most of the listeners that had tuned in (and some lucky live spectators in the theatre of Notodden): ‘Out of Here’, one of the last songs they had written for Aphelion, with a super delicate Robin Ognedal-lick in the mellow, balladesque first half and Tor Oddmund Suhrke’s ultra clean signature staccato riffing in the fierce second part. Followed hard on the heels by ‘Silhouette’, the only song without a mellow part at all, and also one whose origins date back to the “Pitfalls” sessions. Simen Børven’s switch from bass synth to bass guitar is very smooth and he is the one to reveal a fun fact for this song as well: it’s the only Leprous song he can play on one string! Other than that, ‘Silhouette’ is a relentless Baard Kolstad show-off that doesn’t let up for the entire duration of 3:44. ‘All the Moments’ on the other hand surprises with a classic rock slide guitar intro courtesy of Robin, the subdued middle-part with only Einar’s piano and vocals is sure to raise some goosebumps, and Baard’s fill towards the last chorus is just pure epicness. For a ‘quickly improvised’ song that came to be during the ‘Castaway Angels’ session, ‘All the Moments’ is a masterclass in songwriting, just like the rest of “Aphelion”.

‘Have You Ever?’ concludes the first half of “Aphelion”, and it is a most unusual one. Composed and produced almost entirely by bass player Simen (with a little help in the lyrics and melody department from Einar), this is the only song on the entire album without bass guitar ironically. But Simen’s gnarly bass synths make more than up for it. It is also one of the most interesting songs rhythmically, as Baard’s drums deliberately drop out for a few counts here and there in the chorus and leave the vocals and strings to carry over the momentum. A little stroke of genius I must say. 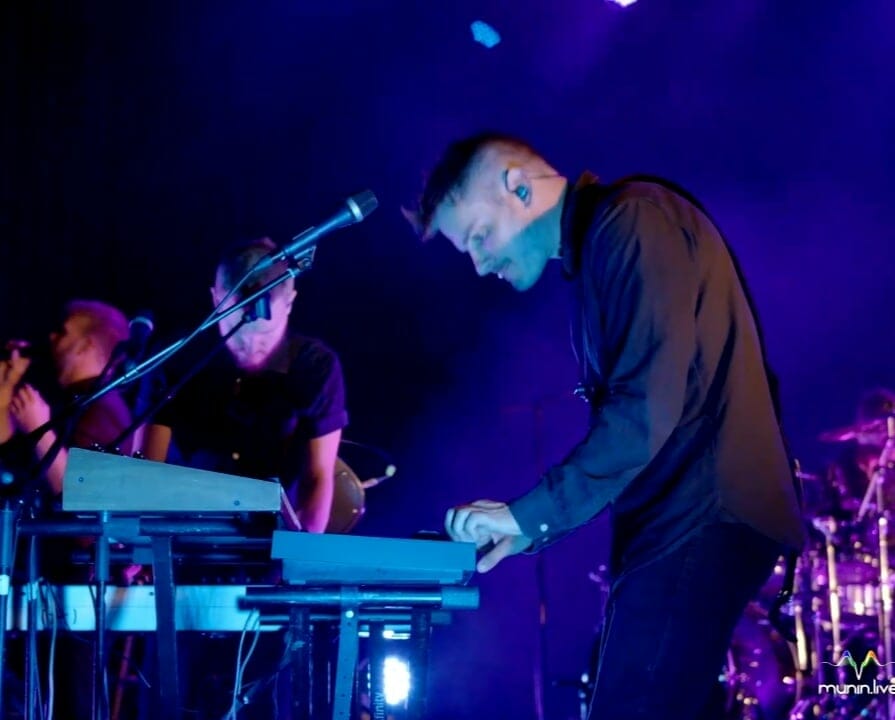 Starting off the second half is the second single ‘The Silent Revelation’ and we learn that they have carried the original sketch since the “Malina” sessions, but it took them until now to flesh it out to a song they were satisfied with. The majestic outro works marvellously in the live setting as well. The perfect companion to it: the following ‘The Shadow Side’, another leftover from the “Pitfalls” sessions. Simen is celebrating every single note on his bass, but the real star here is Robin, who is finally allowed to start up his lickmachine and is even allowed to go into full solo mode towards the end. Compared to this, that famous little part in ‘The Sky Is Red’ doesn’t deserve the name guitar solo. 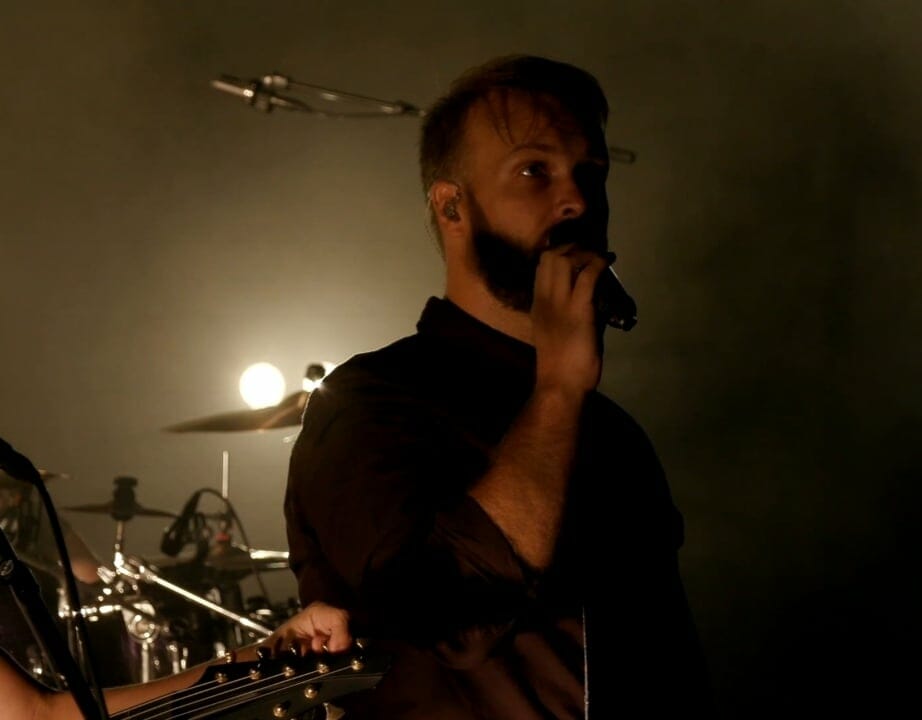 ‘On Hold’, arguably the best song on “Aphelion”, is pulling all the heartstrings with melodies (and backing vocal harmonies) to die for in the sombre verses and a triumphant, soaring chorus a la ‘Alleviate’. The bubbly synth bass preparing Robin’s tapping frenzy, Raphael’s Cello leading into the last chorus: at this point, I’m convinced that this is what pure perfection sounds like! Definitely a highlight in an album (and livestream) full of highlights. 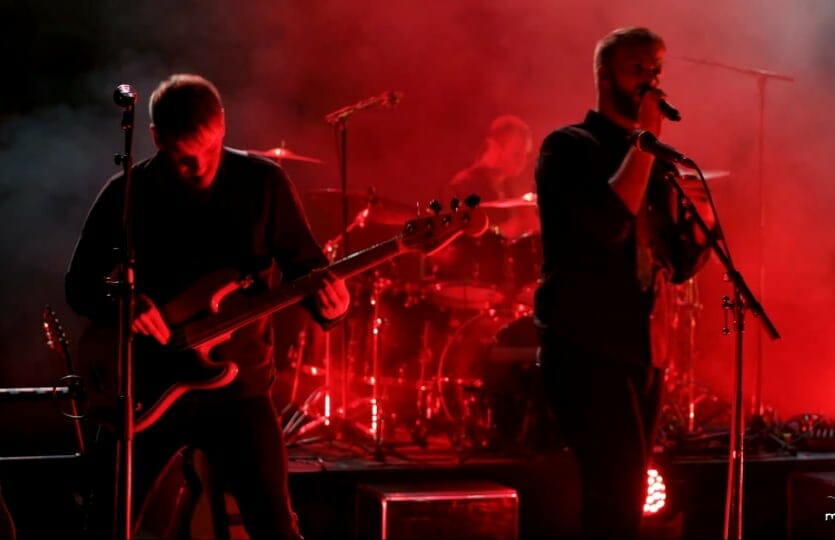 Originally a 2020 standalone single, the completion of ‘Castaway Angels’ was also kind of the decisive moment when it dawned on Leprous that they want to go for another full length album again, which they initially hadn’t planned. It was not the biggest hit for me when it first dropped last year but turned out to be a real grower. The delicate but monstrous continuous build has played its way into my heart big time. 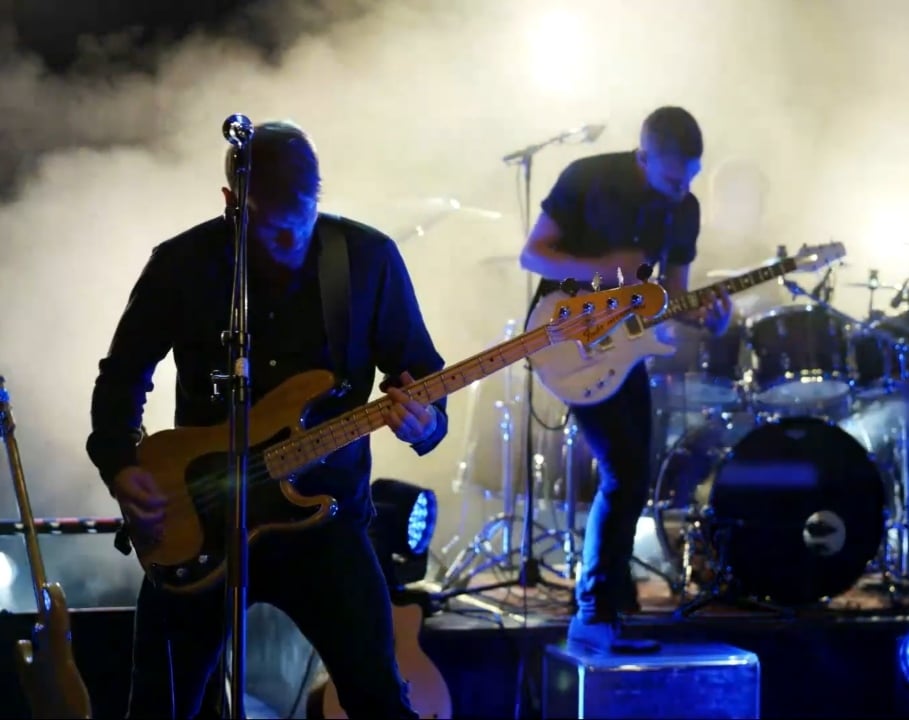 But wait, didn’t Leprous have a Big Brother type songwriting session where the fans not only could watch them 24/7, but also steer some parameters of the song? Right, the outcome, a “random stew of randomness” according to Einar, listens to the name ‘Nighttime Disguise’ and sees “Leprous playing prog again” (also quote Einar). Not only that, the brass section courtesy of the Blåsemafian returns, at least on the backing track (they also added another layer of epicness to the opening track ‘Running Low’). And Einar is finally screaming again! Well, now that the album has been out for almost two weeks, everyone knows that, but believe me, it was a huge surprise and the icing on the cake of this very special livestream. 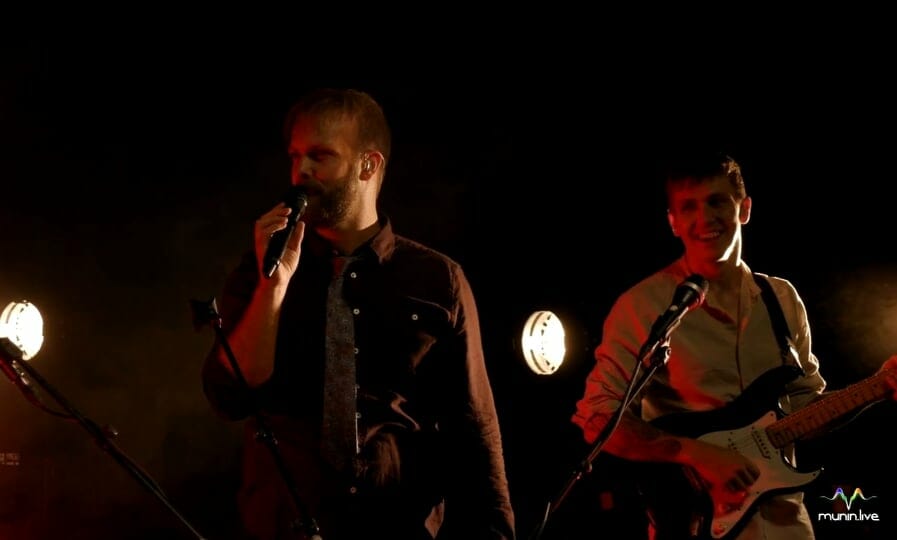 In conclusion, I have to say that this pre-release livestream for “Aphelion” proved to be the perfect tool to hype up the Leprous fanbase even more if that was even possible. It was also a worthy culmination and high point to end their very successful string of livestreams that has carried them through the pandemic. Now back to real concerts and tours please, universe! 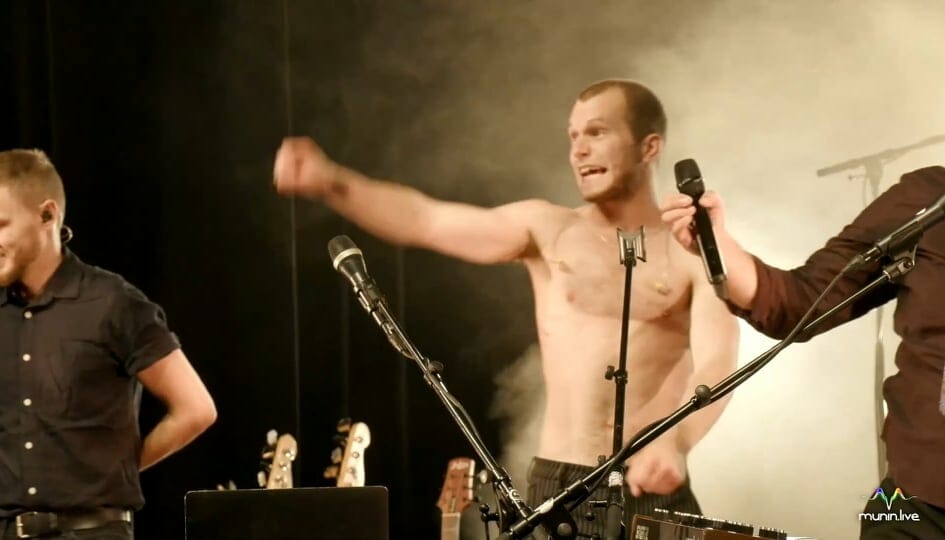 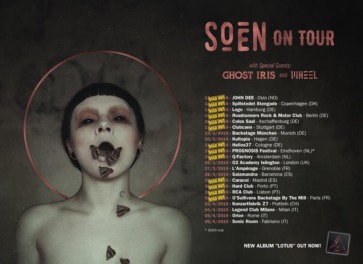 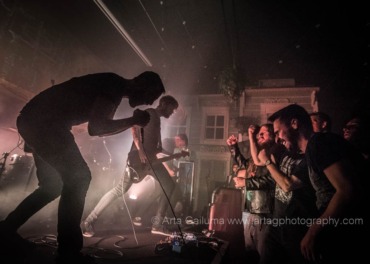 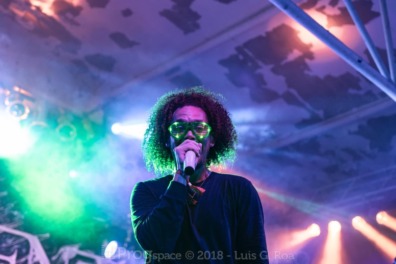